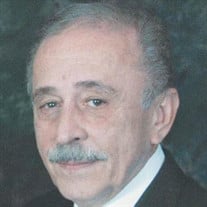 Eraldo Nicola D'Orsogna went to be with our Lord and God on February 9, 2022, surrounded by his loving family. He was a member of St. Joseph Catholic Community, Eldersburg. He graduated from Binghamton High School and then entered the Army for two years stationed in Paris, France. He then went to Delhi College and married his sweetheart, Ann Marie on January 15, 1966. Eraldo then worked for K-Mart and then with Pepperidge Farm as a territorial manager. His life long dream was to be a restaurant owner and chef. He opened his restaurants known as D'Orsogna's Inn in Raritan, NJ and then in Endicott, NY until he retired. He and his wife then moved to Port Richey, FL for 22 years where he enjoyed activities with his friends at the Gulf Harbor Yacht Club. He then moved to Eldersburg, MD to be closer to family. Eraldo's greatest loves were cooking and spending time with his family. He loved to joke with his grandchildren telling them stories about his past. He loved his shows, Ancient Aliens and Super Natural. He also had a passion for gardening and making his yard look beautiful. Eraldo is survived by his wife Ann Marie of 56 years. They have three children; sons and daughters-in-law Christopher E. and Sharon D'Orsogna of Maryland, Anthony J. and Rosa D'Orsogna of Somerset, NJ and daughter and son-in-law Nicole Marie and Rob Ford of Denver, Colorado; grandchildren: Ashley, Christopher, Michael, Amber, Amanda, Tyler, Mathew, John, Isabella, Courtney, Gianna and Jessica; great-grandchildren: Joey, Jake, Anthony, Nicholas, Joe, Storm and Damon; sister and brother-in-law Midge and Edward Wilson of West Virginia. He is also survived by nieces, nephews and cousins. He was predeceased by his parents Dr. Edward E. D'Orsogna and Margaret Bedosky D'Orsogna and his loving in-laws, Joseph and Mary Hancharik. Also his sister-in-law and brother-in-law Anita and Joseph Simek. Ann Marie wishes to express her deepest thanks to Sharon, Rosa and Nicole for caring for their dad when in need. In lieu of flowers, memorial donations may be made to any veterans charities in his name. The family will receive friends from 2 to 4 and 6 to 8pm on Monday, February 14, 2022, at Haight Funeral Home & Chapel, 6416 Sykesville Road, Sykesville. A funeral liturgy will be held at 11am on Tuesday, February 15, 2022, at St. Joseph Catholic Community, 915 Liberty Road, Eldersburg, MD. Private interment will be in Garrison Forest Veterans Cemetery, Owings Mills, MD. Online condolences may be offered at www.haightfuneralhome.com

Eraldo Nicola D'Orsogna went to be with our Lord and God on February 9, 2022, surrounded by his loving family. He was a member of St. Joseph Catholic Community, Eldersburg. He graduated from Binghamton High School and then entered... View Obituary & Service Information

The family of Eraldo Nicola D'Orsogna created this Life Tributes page to make it easy to share your memories.

Eraldo Nicola D&#39;Orsogna went to be with our Lord and God on February...

Send flowers to the D'Orsogna family.