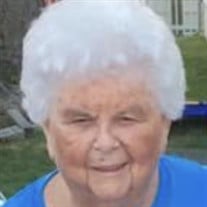 Eleanor "Dimps" L. Bruce (nee Allen), passed away December 14, 2021 at her home in Selbyville, DE. Born April 15, 1938 in Baltimore, she was the daughter of the late William G. and Mary R. Sullivan Allen. She was the wife of William (Bill) Bruce who she was married to for 63 years. She had been a volunteer at Holy Family Catholic School in Randallstown for many years where she started the physical education program. She worked at George's Supermarket in Eldersburg and Copper Ridge in Sykesville before retiring in 2000 to Selbyville, DE. For many years she was an active member of St. Joseph's CYO in Eldersburg. She was a current member of St. Luke's Catholic Church in Ocean City, MD and a member of the Swan Keys Sports Club where she served as president for 9 years. She attended Notre Dame Prep School and St. Bernadine Grammar School in Baltimore. Growing up she was a member of the Baltimore Figure Skating Club. Surviving in addition to her husband are children William "Billy" Bruce, Mike Bruce and his wife Carol Bruce, Mary Beth Howsden and her husband David Howsden, grandchildren Nicole Bruce, Ashley Bruce, Will Bruce, Michael Bruce, James Bruce, Shannon Spencer and her husband Josh, and Casey Howsden, nieces Sharon Puckett and Lisa Truskowski, great nephews Daniel Puckett and his wife Margaret, and Randy Puckett, great great nieces and nephew Jane Puckett, Hattie Puckett and Henry Puckett. She was predeceased by her sister and brother-in-law Nancy and Al Truskowski. The family will receive friends on Monday, December 20, 2021 from 2-4pm and 6-8pm at Haight Funeral Home & Chapel, 6416 Sykesville Rd., Sykesville. Funeral services will be held on Tuesday, December 21, 2021 at 10:00 AM at the funeral home. Interment will be in Lake View Memorial Park, Sykesville.

Eleanor "Dimps" L. Bruce (nee Allen), passed away December 14, 2021 at her home in Selbyville, DE. Born April 15, 1938 in Baltimore, she was the daughter of the late William G. and Mary R. Sullivan Allen. She was the wife of William (Bill)... View Obituary & Service Information

The family of Mrs. Eleanor Louise Bruce created this Life Tributes page to make it easy to share your memories.

Send flowers to the Bruce family.