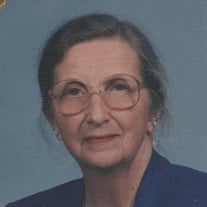 OBITUARY FOR DOROTHY CLARKE SCHAFER FEBRUARY 18, 1924 - MAY 3, 2021 Sykesville - Dorothy Clarke Schafer died on May 3, 2021, at the venerable age of 97, with her daughters by her side. Raised in the house on Springfield Avenue that was built the year of her birth, Dorothy lived all her long life in Carroll County. Daughter of Clarence and Norma Fleming Clarke, Dorothy and her beloved brother Donald were raised in a loving home, surrounded by relatives that doted on them. Dorothy’s musical gifts were discovered early, and she spent many hours of her childhood studying piano and voice at Peabody Preparatory in Baltimore and practicing in the front room of her home. A model student, Dorothy graduated from Sykesville High School at 16, and attended Western Maryland College in Westminster, double majoring in piano and English and graduating cum laude in 1944. During two summers of her college years, she was a counselor at Laurel Falls Camp for Girls on Screamer Mountain, near Clayton, Georgia. In 1945, she married George William (Bill) Schafer II of Baltimore and Marriottsville, and they made their first home in Sykesville. After their first children, G. William (Billy) III and Suzanne, were born, Bill and Dorothy moved to Lone Oak Farm in Woodbine. Dorothy worked hard as a farmer’s wife, especially in the summer, canning and freezing fruit and vegetables from Bill’s prolific garden. She also taught music and English at Sykesville High School until the birth of her third child, Dorothy (Dotty). When Dotty started school, Dorothy resumed teaching, this time as a Language Arts Teacher at Mt. Airy Middle School. After 33 years of marriage, Dorothy and Bill divorced (although they remained good friends), and she moved back to Sykesville to take care of her mother for the last ten years of her mother’s life. Once back in Sykesville, Dorothy quickly became involved in the life of her home town. She served on the Historic Commission, the Springfield Cemetery Board, and with the Rev. James Purman, she founded the Gate House Museum (the museum’s Rose Garden is dedicated to her), and, as she aged, she became the repository of Sykesville’s history. A third generation and life long member of Springfield Presbyterian Church, Dorothy was the church’s organist, and sometime choir director, for 50 years (with a five year time out as the organist at St. Barnabas Episcopal Church), and was Ordained an Elder, serving on the Session and as archivist of the church. In 2006, Dorothy moved up the street to Fairhaven, where she resided for the last 15 years of her life, and where she became beloved by her care givers who called her Mother (or Mama) Schafer. Enamored by all things Scottish, in her seventies Dorothy took a trip of a life time to Scotland on a Presbyterian Heritage tour, and upon her return took up Scottish dancing for a number of years. Dorothy was a life long Democrat and an advocate for Civil Rights and liberal causes all her life. Central to Dorothy’s adult life were her children, whom she dearly loved, and who loved her in return. She instilled in them a passion for music, reading, history, nature and so much more, and imbued them with her curiosity for life. She entertained them with stories of her childhood, her college years, and Laurel Falls Camp. She wrote them innumerable letters when they were away from home. She welcomed their cousins and friends and formed loving relationships with many of them. She supported her children in all their endeavors and was proud of their accomplishments. Dorothy truly came into her own as a grandmother, and spent untold hours lavishing love on her six grandchildren, Henry (Amanda), Malcolm and Charles Coates and Jillian, Jeremy (Nicole) and Teddy Joseph. It is a sorrow that because of Covid she never met her great grandchild, Jacob David Golbek Coates. Dorothy is survived by her brother Donald, with whom she maintained the closest of ties, and his children, who greatly loved their Aunt Dot. While thankful for her 97 years of life, she is dearly missed by her children, Bill (Linda) Schafer, of Virginia Beach, Va., Suzanne (David Coates) Schafer-Coates of Greensboro, N.C., and Dorothy/Dotty Schafer Joseph, of Sykesville, her grandchildren and great grandchild. Memorial contributions in the name of Dorothy Clarke Schafer may be made to The Gate House Museum, 7283 Cooper Drive, Sykesville, MD 21784 or The Leukemia & Lymphoma Society Mid-Atlantic Region, 100 Painters Mill Rd., Suite 400, Owings Mills, MD 21117. The family will receive friends on Friday, July 23, 2021, from 6-8pm at Haight Funeral Home & Chapel, 6416 Sykesville Road in Sykesville. A memorial service will be held on Saturday, July 24, 2021, at 1pm in Bishop's Chapel at Fairhaven, 7200 Third Avenue in Sykesville where a reception will follow in the Johnzie Room at Fairhaven until 4pm. A private burial will be held at Springfield Cemetery, Sykesville.

OBITUARY FOR DOROTHY CLARKE SCHAFER FEBRUARY 18, 1924 - MAY 3, 2021 Sykesville - Dorothy Clarke Schafer died on May 3, 2021, at the venerable age of 97, with her daughters by her side. Raised in the house on Springfield Avenue that was built... View Obituary & Service Information

The family of Dorothy Clarke Schafer created this Life Tributes page to make it easy to share your memories.

Send flowers to the Schafer family.