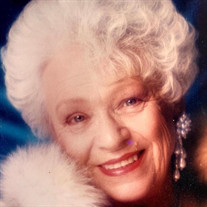 Dorothy Elizabeth Sutton Mobley left this life precisely one century after her birth at 6pm on the evening of October 13, 1921, with two of her children by her side at Angel’s Touch Assisted Living Home in West Friendship, Maryland. “Dottie” was one of the two daughters of the late Howard I. Sutton and Ella R. Sutton born in the City of Baltimore, Maryland in the 1920s, her sister being Jeanne McClary. Dottie graduated from Forest Park High School in 1940. She immediately entered the workforce as a phone operator at Western Maryland Diary, and in 1943, like many of her countrymen, found work in support of the war effort during World War II. She met U. S. Army Captain Louis R. Mobley and married him in 1944. As a wife of an IBM executive Dottie happily joined Louis as they set up homes in various locations such as Philadelphia; Endicott, New York; Woodcliff Lake, New Jersey; and Melville, New York, before returning to her native Maryland in 1961. It was at this time that Dottie and Louis purchased their dream home; a majestic manor house high on a knoll in the middle of Hayland Farm near Clarksville, Maryland. For over five decades she proudly raised her five children in this one-story postwar stone house. In addition to raising her own family she took in many a teenager and other wayward souls needing a loving home. Dottie was well-known for her loud, vibrant, sometimes piercing voice, and a laugh like no other, and she became an amateur clown, adopting the persona “Polka Dottie”, and visiting children’s wards at hospitals and also nursing homes and the like. Dottie was a devoted mother to Dennis Mobley, Richard Mobley, Karen Mobley, Christopher Mobley, and Diane Raymond. Dottie was preceded in death by her parents, her husband Louis Mobley, her twin children Richard Mobley and Diane Raymond, and her granddaughter Mache Peters. She is survived by her sister Jeanne, her children Dennis, Karen, Christopher, 12 grand-children, 14 great-grandchildren, and even a fifth-generation grandson. She was quite fond of her daughters-in-law Faye Mobley, Debra Mobley, and Sandra Mobley, son-in-law Ray Bourgeois, and a host of surviving relatives and countless friends. Dottie preferred that no fuss be made about her (flowers, etc.). A celebratory memorial event is being discussed for later in the year and will be publicized by social and other media.

Dorothy Elizabeth Sutton Mobley left this life precisely one century after her birth at 6pm on the evening of October 13, 1921, with two of her children by her side at Angel&#8217;s Touch Assisted Living Home in West Friendship, Maryland. &#8220;Dottie&#8221;... View Obituary & Service Information

The family of Mrs. Dorothy Elizabeth Mobley created this Life Tributes page to make it easy to share your memories.

Send flowers to the Mobley family.