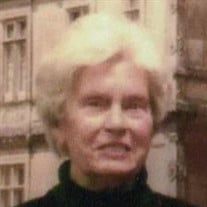 Dorothy G. Fusselbaugh (nee Gardner) 92, of Eldersburg, passed away peacefully on Thursday, April 30, 2020 at Sunflower Hill Assisted Living in Westminster, MD. She was a resident of Carroll County for 64 years. Born January 15, 1928 in Baltimore, MD to William V. and Mary L. Gardner. Dorothy was predeceased by husband, Robert R. Fusselbaugh (died 1974). She is survived by her loving children Michael R. Fusselbaugh and wife Agnes of Pinehurst N.C., Bruce G. Fusselbaugh and wife Ann of Eldersburg, MD and Mary Carol McCauley and husband Douglas of Finksburg, MD. She was the loving Grandmother of Bridgett McCauley (Finksburg, MD), Ben McCauley (New Orleans, LA), Kimberly Crear (Forney, TX), Christy Craig (Wheaton, IL), Michelle McBeth (St. Charles, IL), Sarah Sraver (Littlestown, PA), Katie Fong (Westminster, MD) and Matthew Fusselbaugh (Seattle, WA), and 17 great grandchildren and one great great grandson. Dorothy grew up in Baltimore and graduated from Forest Park High School. She married Robert in 1949, they lived in Baltimore and Parkville before moving to Sykesville in 1956. While raising her family, Dorothy had a variety of jobs including clothing designer, bakery attendant and co-owner of a thrift store in downtown Sykesville. She was active in the PTA, cub scouts and St. Barnabas Episcopal Church (Sykesville). In the mid 1970’s she began her very successful Real Estate career working for Peach & Co. in Eldersburg, MD and then for a builder in the early development of Columbia, MD. Dorothy later worked as a sales representative for a local builder in an over 55 community in Eldersburg. Noted as a customer oriented and meticulously thorough representative, she was well liked and respected by all. Dorothy focused her time on family, friends, travel, reading, playing bridge, crossword puzzles and working on family genealogy. She loved visiting family in Texas, Illinois, North Carolina, Connecticut, and New Orleans. Her many travels also took her to Williamsburg, Charleston, New England, San Francisco, England, Scotland, Wales and a European River Cruise. Frequently traveling with friends offered some of her favorite memories. In 2004 Dorothy moved to Homeland in Eldersburg and enjoyed condo life greatly. She made many friends who referred to her as “the Energizer Bunny” for her pep and busy life. Still her greatest love was her family, who she saw often, spoke to daily and always supported and encouraged. Her condo was filled with cherished pictures of family. Dorothy was deeply involved in researching the family genealogy over several decades and amassed a great file stretching back to the year 1000 that included knights and royalty in Europe. She was most pleased to be accepted into the Daughters of the American Revolution in 2019. She was an active member of the Crossroads Community Church in Westminster and Eldersburg. The welcoming support of the members and Pastors was dear to her. Dorothy was well known for her kindness, class and tact. She cherished her friends that went back over 70 years and was loved by all. The family sincerely appreciates the care and support of the staff at Sunflower Hill Assisted Living who looked out for her in the last two months of her life. They did a fabulous job and mom came to think of them as extended family. We also appreciate the hospice care through Carroll Hospice for their support. A private family burial will be held at Druid Ridge Cemetery in Reisterstown and a Celebration of Life will be announced at a later date when gatherings are permitted. Funeral arrangements are being handled by Haight Funeral Home in Eldersburg who will post the date and time of the Celebration on their website. In lieu of flowers, the family asks that donations be made in her name to Crossroads Community Church for Missions @ Crossroads Community Center, 895 Leidy Rd. Westminster, MD 21157. Attention: Ann Pope

The family of Dorothy G. Fusselbaugh created this Life Tributes page to make it easy to share your memories.

Send flowers to the Fusselbaugh family.