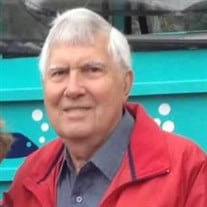 Donald Gordon Mackey, 90 years old, of Sykesville MD, passed away suddenly Sunday, April 10, 2022 after complications from a stroke. He died peacefully at Gilchrist Center Howard County surrounded by his devoted family and friends. Don was born in Tupper Lake, New York where his parents, Bertram Mackey, a veteran of WWI and Mary Mackey were able to find work during the Depression years. He would often recall memories of those difficult years. Later the family moved to Bayard Street in Seneca Falls, New York. Don attended Mynderse Academy in Seneca Falls and was both an athlete and musician. He played football and basketball and was the pole vaulter on the track team. He set the record (at that time) for the 440. Musically, he was always in the band (clarinet) in both high school and college. At Mynderse, Don met Nona Holland, the love of his life, who would become his wife of 60 years. Don would recall that he became the president of the Glee club so he could spend as much time as possible with her. Don and Nona raised three children in Seneca Falls: Mary Erturk (Erdal) Canandaigua, NY; Kathy Alvaro (Phil) Pittsford, NY; and Donald L Mackey (Patti), Laurel MD. Don graduated as an Electrical Engineer from Clarkson College with honors in 1953. After two years of military service with Surface to Surface Guided Missiles at Fort Bliss, El Paso Texas, he worked for 43 years in the cathode ray tube industry supplying product for the television sets sold in the US and internationally. His work experience included management positions in engineering, manufacturing, marketing and quality for Sylvania, GTE, Philips Electronics and RCA. He traveled all over the US as well as Japan, Taiwan, the Americas and nearly every country in Europe. In fact, he took 77 different international trips while he was working. Don would recall that the work in the industry at that time was exciting, educational and challenging but his favorite place to be was home with his family. When Don retired in 1996, he and Nona moved to Sun City Center, Florida. They lived there for 18 years playing golf, bridge and even line dancing. Don served as the president of the community HOA for 10 years and people remarked that when Don was in charge, things always ran smoothly. Shortly after Nona’s untimely death in 2014, he made the decision to move to Fairhaven Retirement Community in Sykesville MD which brought him closer to family. Don has been living at Fairhaven independently for the past 8 years. Don’s family has grown over the years and he was the proudest as a Grandpa could be. He loved deeply and kept in touch regularly through his iPhone with his seven grandchildren; Mac (Kari) Mackey, Severna Park MD; Erin (Ross) Pattison, Pittsford, NY; Jesse (Melissa) Mackey, Clarksville, NY; Erol (Ashleigh) Erturk, Andover MA; Phil Alvaro, Horseheads, NY; Katie (Patrick) Carr, Stuttgart, Germany; and Robert Alvaro, NYC, NY. Don’s 10 Great Grandchildren were his pride and joy. They lovingly named him “Grandpa Bear” and he was able to name them all in chronological order while he was in the hospital this past week. They are Jonathan Mackey, Rory Erturk, Woody Mackey, Reagan Erturk, Grace Mackey, Leo Carr, Reli Carr, Alice Mackey, Rosie Mackey, and Jack Pattison (arriving August 2022). Don is also survived by his two nieces, Mary Connolly (Dave), Wyckoff NJ; Mary Hurley, Matthews, NC; and nephew Bill (Claudia) Carroll, Westwood NJ. He was so happy to see and spend time with everyone in New Jersey just a few months ago. A most generous, handsome, thoughtful, hardworking, kind man with a great sense of humor has been lost to all of us and will be deeply missed. His wonderful dinner companions and friends at Fairhaven, Tom, Art, Jim and Lou were as important to him as family. Watching Syracuse basketball will never be the same as Don was an avid fan for years. We are also so proud to share with everyone that he was so computer savvy that he did his own income taxes online for the past two years. He was a remarkable man and there are truly “90 reasons we love you so.” A burial service with Military Honors for Don will be held Friday, May 6, 2022 at 10AM at the Baltimore National Cemetery, 5501 Frederick Avenue, Baltimore MD 21228. Followed by A Celebration of Life Reception, Friday May 6, 2022 at 2PM at Fairhaven Retirement Community, Johnzie Lounge, 7200 Third Avenue, Sykesville MD 21784. In lieu of flowers, tribute donations may be made in Don’s name to the Wounded Warrior Project P.O. Box 758516 Topeka, Kansas 66675-8516 Or go online: to fill out a donation form at support.woundedwarriorproject.org Or by phone: 855-448-3997

The family of Mr Donald Gordon Mackey created this Life Tributes page to make it easy to share your memories.

Send flowers to the Mackey family.