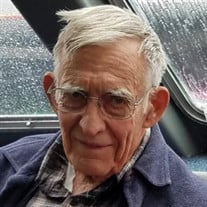 David L. Madden, 88, of Sykesville, died February 13, 2021, at his home. Born August 10, 1932, in Illinois, he was the son of Floyd E. and Opal O. (Payne) Madden. From 1963 until his retirement in 1993, Dr. Madden served in the U.S. Public Health Service at the National Institutes of Health in Bethesda, Maryland, except for four years from 1988 to 1992, when he was the Science Attaché at the American Embassy in New Delhi, India. Dr. Madden attained the rank of captain with the USPHS. Dr. Madden earned his D.V.M and M.S. from Kansas State University in 1958 and his PhD. from Purdue University in 1963. Earlier in his career, he served in the U.S. Air Force, National Guard, and Army Reserve. In retirement, he was a Professor of Veterinary Microbiology at Ross University, St. Kitts, West Indies. Dr. Madden lived a lifetime of service in the communities he lived. He was active with scouting for about thirty-five years serving in various capacities, including as scoutmaster, for troops in Maryland, Florida, and India. He was a volunteer with the American Red Cross and was active in service in his churches. Surviving are his wife, Nancy; son, David; daughter, Miriam Mohr; step-son, Douglas and his wife Amanda; step-son, William Tzan; brother, Roger and his wife Carole Madden; sister, Marsha Jones; grandchildren John Mohr, Jason Mohr, Lilibeth Tzan, Lesley Tzan, Maya Tzan, and Lucy Tzan; and great-grandchildren, Alexander and Matthew Mohr and Aviana Henderson. He was predeceased by a son, William. The family will gather for a memorial service at a later date. Memorials may be given to Murray Hill United Methodist Church, 4101 College St., Jacksonville, FL 32205, or St. Paul’s United Methodist Church, 7538 Main St., Sykesville, MD 21784.

The family of Mr. David L. Madden created this Life Tributes page to make it easy to share your memories.

Send flowers to the Madden family.