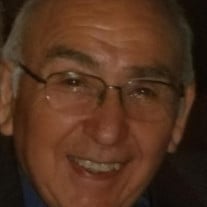 Danny B. Garcia, 89, of Sykesville, passed away on January 3, 2021. Danny was born in Scotts Bluff, Nebraska to August and Juanita Garcia on October 1, 1931. He was a beloved father, brother, husband and friend and was an active parishioner of many Catholic parishes throughout his life, most recently at St. Joseph Catholic Community in Eldersburg, Maryland. He is cherished and remembered for his boundless faith, unwavering love for all who he called “family”, and for the example he set for taking absolute joy in all of life’s tasks, whether great or small. Danny is preceded in death by his wife, Jane Haines Garcia, his daughter, Karen Near, and his former wife, Patricia Maupin Garcia. He is survived by his sisters Nadine Dilts, Marianne Chamness, and Terri Clausen and her husband Mike; his sons Frank Garcia (Sharon), Mark Near (Sue), Craig Haines (Janine) and Scott Haines; his daughters Sharon M. Garcia, Cynthia A. Roland, Maria E. Stephenson, Karen Dirrigil (Bill) and Kristin Haines (Scott). He is also survived by 17 grandchildren and nine great-grandchildren. A Mass of Christian Burial will be privately celebrated and limited to Danny’s fellow parishioners of St. Joseph Catholic Community on Thursday, January 7 at 11:00 a.m. Out of a great concern for the health of all, virtual attendance at the mass will be available via live stream https://saintjoseph.cc/watch/ those who wish to pay their respects are urged to participate in the funeral mass in this manner. Interment will be private. In lieu of flowers, memorial donations may be made to St. Joseph Catholic Community of Eldersburg or to Dove House Hospice in Westminster.

Danny B. Garcia, 89, of Sykesville, passed away on January 3, 2021. Danny was born in Scotts Bluff, Nebraska to August and Juanita Garcia on October 1, 1931. He was a beloved father, brother, husband and friend and was an active parishioner... View Obituary & Service Information

The family of Mr. Danny B. Garcia created this Life Tributes page to make it easy to share your memories.

Send flowers to the Garcia family.