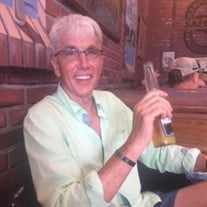 Daniel P. Rexford, a husband, father, brother and life-long fitness zealot died Wednesday, July 28th, of complications from surgery for colon cancer. He was 64. Dan’s family was always his first priority. He was raised in a wonderful neighborhood in Catonsville where the entire Rexford family made lifelong friends. As he got older, he remarked to his brother, David, how lucky they were to grow up in such an active, friendly environment. Dan graduated from Catonsville high school, after which he attended St. Mary’s College on the Eastern Shore before graduating with a B.A. from UMBC. Dan joined Erickson Retirement Communities early in its history and gained national prominence for leading the nationwide marketing effort for what became the largest developer of retirement campuses in the country. His team achieved monthly sales results two to ten times what most communities in the industry were achieving. Several years after his father died in 1993, Dan’s mother, Carol, moved into the Charlestown Retirement Community, which was Erickson’s first community and where Dan maintained his office. Dan remained in the retirement industry until his own retirement in November 2020, serving as a vice president with Baltimore-based Brightview Senior Living and most recently with Love and Company of Frederick. An accomplished athlete his entire life, Dan, and his wife Sue, who has worked several years as a personal trainer and kickboxing instructor at Kinetic Systems in Columbia, formed a very competitive mixed doubles volleyball team and competed in regional and beach tournaments. ​ Dan was also a familiar sight on the mountain biking trails of Patapsco River State Park and, most recently, had regularly pressed himself by sprinting up and down the hills near Catonsville Community College and Catonsville High School. He was running the ridges near their home the weekend in April just before a blood clot led to the diagnosis of Stage 4 colon cancer. He is survived by his wife of 37 years, Sue Morgan Rexford; son Pratt of Ellicott City; daughter Caroline and her husband, Neal Eshleman of Woodstock; his mother Carol, Catonsville, and his brother David and life long fiancee, Deborah, of Katy, Texas. A Celebration of Life for Dan will be scheduled for August. In lieu of flowers, donations may be made to the Chesapeake Bay Foundation

Daniel P. Rexford, a husband, father, brother and life-long fitness zealot died Wednesday, July 28th, of complications from surgery for colon cancer. He was 64. Dan&#8217;s family was always his first priority. He was raised in a wonderful neighborhood... View Obituary & Service Information

The family of Mr. Daniel P. Rexford created this Life Tributes page to make it easy to share your memories.

Send flowers to the Rexford family.