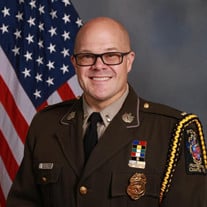 Daniel "Dan" John Friz, age 50, of Mount Airy, died suddenly in a traffic accident on Sunday, October 31, 2021. He was born November 15,1970 in Minnesota. He was the beloved and cherished husband of 13 years to Katie Friz; devoted and loving father of Grace, Laila, and Noelle Friz; loving brother-in-law of Kerri Tilghman; and loving uncle of Madi and Mia Friz. He was preceded in death by his father, Thomas Otto Friz, whom he missed tremendously, but is is now joyously reunited with in Heaven. Dan was an amazing human being to all who knew him. He was kind, funny and caring to all, and he dedicated his life to public service and lifting others up and helping them. He loved to teach and mentor others, and gave of himself whenever he could. His loss will be mourned by the community, his colleagues, and his beloved family. Dan was self-motivated and began working at an early age running a paper route in his neighborhood. Dan’s 32 years of public service began right after he graduated from Centennial High School in 1989. At the age of 18, he joined the United States Navy. Dan was extremely proud of his time in the Navy which he credited with helping him become the man, leader, friend, husband, father, and colleague we remember today. Dan began his Naval service on June 14, 1989, when he reported to the Recruit Training Command Great Lakes, Illinois. Upon completion of his eight weeks of training, he proceeded to Fleet Combat Training Center, Atlantic Dam Neck, Virginia Beach, Virginia. Upon completion of Fleet combat training, Dan received orders to Operation Specialist Class “A” School. The Operational Specialist or OS, functions as the ships Plotter, Radio-Telephone, and Command and Control Sound Powered telephone talkers, and maintains the Combat Information Center (CIC). This is a critical function on U.S. Naval Ships. Upon graduation of the Fleet Combat Training Center, Dan earned the NEC or Naval Enlisted Classification OS-0311. Aegis Class Operations Specialist. Upon Graduation, Dan received orders to report to Bath Maine, (which he loved) and reported to the U.S.S Cowpens (CG 63) in May 1990. The Ticonderoga Class Guided Missile Cruiser Ship was in pre-commissioning status. The “Pen”, as it was called by her crew, was still being constructed and preparing for Sea Trials. Stories of Dan revealed he was instrumental in its Commissioning. The U.S.S. Cowpens was commissioned on March 9, 1991. Dan was a distinguished “Plank Owner,” and a proud member of her crew dubbed the “Herd.” The “Pen” was homeported out of San Diego, CA, but traversed to many ports of call around the world. Dan spoke of this time with great enthusiasm. During his time on the “Pen” he earned the ultimate rank of Second-Class Petty Officer (OS2). Dan earned the following Decorations: National Defense Medal, Sea Service Deployment Ribbon; Southwest Asia Service Medal; Good Conduct Medal; Coast Guard Special Operations Service Ribbon; Pistol Marksman; Letter of Commendation and the distinction as a “Shell Back.” Dan also received an “Order of The Ditch” for his ship passing through the Panama Canal. Dan received an Honorable Discharge upon completion of his four years of service. Dan was immensely proud of the U.S.S Cowpens’ missions during the first Gulf War. Dan’s ship was one of three ships that was responsible for a TOMAHAWK weapons strike from the Arabian Gulf. Dan’s ship was ordered to eliminate several of the surface-to-air missile systems that threatened coalition aircraft patrolling the No fly-zone. It is unique that he is a crew member that took the U.S.S. Cowpens from “cold steel” to “battle.” After his initial enlistment Dan then joined the United States Navy Reserves as a Master of Arms Second Class (MA2) and was Honorably Discharged again in 1997. Dan started his police career in Session 27 of the Montgomery County Police Academy on January 18,1994 and graduated on June 24th, 1994, earning the class’s Physical Fitness award. Upon graduation, Dan worked for the Montgomery County Sheriff’s Office and then the Gaithersburg City Police Department. Dan lateraled to the Montgomery County Police Department in 2003, where he rose to the rank of Lieutenant. He has many accolades for his dedicated service to include: Two (2) Chief’s Awards, The Mark Filer Field Training Officer Award, Community Service Award, National Defense Award, Sniper Task Force Award, and Police Marksmanship Expert Designation. At the time of his death he was assigned as the Deputy Director of the Training Academy and he thoroughly enjoyed this role as he previously was a Certified Teaching Instructor, Firearms instructor, and driving instructor. He took a special interest in the recruits of the academy classes as he enjoyed mentoring them and helping ensure their success. Education was important to Dan, and he obtained a Bachelor of Science Degree from Roger Williams University in 1997. He continued his educational pursuits with a Master of Arts Degree from Hood College in 2002, and most recently, a Master of Arts in Executive Leadership from Liberty University in 2008. In the future, he was planning to obtain a Doctoral Degree as his father had done before him. Dan was also an accomplished bagpiper and enjoyed his time with the Montgomery County Firefighters Pipes and Drums Band as well as competing all over the east coast. He performed at numerous weddings, funerals, and fundraising events. His most cherished events were honoring military Veterans. The family will receive friends on Tuesday, from 11am to 1pm and 5pm to7pm at the Christian Life Center, 3154 Green Valley Road, Ijamsville, MD 21754. The memorial service will be held on Wednesday at 11am at the same location. In lieu of flowers, donations may be made to the Montgomery County Law Enforcement Officer Relief Fund online at www.mcleorf.org Please indicate Lieutenant Daniel Friz under the option to choose a specific officer.

Daniel "Dan" John Friz, age 50, of Mount Airy, died suddenly in a traffic accident on Sunday, October 31, 2021. He was born November 15,1970 in Minnesota. He was the beloved and cherished husband of 13 years to Katie Friz; devoted and loving... View Obituary & Service Information

The family of Mr. Daniel "Dan" John Friz created this Life Tributes page to make it easy to share your memories.

Send flowers to the Friz family.