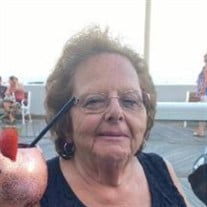 Constance E. "Connie" Franklin, age 66 of Sykesville, passed away, Wednesday, December 1, 2021 at BridgingLife Dove House in Westminster. Born March 11, 1955 in Maryland, she was the daughter of Katherine "Kitty" Warren Whalen and the late Robert Douglas Whalen Sr. She was the wife of the late William Russell Franklin. Connie had been a medical records coordinator at Chapel Hill Nursing Center for 36 years. She loved spending time in Ocean City and relaxing with her husband at their cabin in Pennsylvania. Connie loved fixing holiday meals for her family and was a devoted mother, daughter and sister. Surviving in addition to her mother are son Joshua Ryan Franklin, daughter Kelly Nicole Washington, brother Michael Todd Whalen and his wife Theresa Marie, grandchildren Bryce Perry Washington, Brooke Nicole Washington, and Remi Mae Franklin, niece Megan Michelle Stanford, great niece Liberty Stanford, and numerous cousins. She was predeceased by her brother Robert Douglas Whalen Jr., and by her sister Ida Michelle Whalen. Funeral services will be held on Tuesday, December 7, 2021 at 11:00 AM at Haight Funeral Home & Chapel, 6416 Sykesville Rd., Sykesville. The family will receive friends at the funeral home on Tuesday from 10 am until the start of the service. Interment in Lake View Memorial Park, Sykesville. In lieu of flowers, donations may be made to the American Cancer Society, 1393 Progress Way, Suite 908, Eldersburg, MD 21784.

The family of Constance "Connie" E. Franklin created this Life Tributes page to make it easy to share your memories.

Send flowers to the Franklin family.