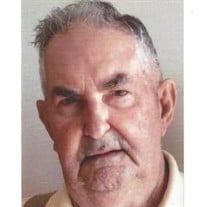 Carl Leon "Brandy" Brandenburg, Jr., age 93, of Sykesville, passed away on Sunday, August 15, 2021, at Birch Manor, Sykesville. Born June 23, 1928, in Gaither, MD (Carroll County) he was the son of the late Carl Brandenburg and Mary Evans Brandenburg. He was predeceased by spouses, Faye McElroy Brandenburg and Marian Louise Brandenburg. Carl retired as a maintenance supervisor from the State of Maryland's Division of Correction, Central Laundry Camp, Sykesville. He was a veteran of the US Army serving from 1946-48, He was a member of the Sykesville American Legion Post 223 where he was a past Commander. He was the oldest living member, life member and former Chief of Sykesville-Freedom District Fire Department. Brandy enjoyed woodworking, repairing lawn mowers and especially spending time with his family. He is survived by sons and daughters-in-law: Carl Steven and Christine Brandenburg of Annapolis and William Lester and Jackie Brandenburg of Hanover, PA; step-daughters and their spouses: Judy and William McClanahan of Deep Creek and Terri and Dennis Devilbiss of New Windsor; brother Millard Steven Brandenburg of Sykesville; grandchildren: Melissa Ann Brandenburg, Mark Leon Brandenburg, Ashley Habib, Zachary Brandenburg, Lauren Brandenburg and Lauren Steirer and step-grandsons: Brian and Jason McClanahan and Dustin and David Devilbiss. He is also survived by 3 great-grandchildren and 3 step-great-grandchildren. The family will receive friends from 5 to 7pm on Wednesday, August 18, 2021, at Haight Funeral Home & Chapel, 6416 Sykesville Road, Sykesville where a funeral service will be held on Thursday, August 19, 2021 at 1:30pm. Interment will be in Lake View Memorial Park. Those desiring may make memorial donations to BridgingLife Hospice, 292 Stoner Avenue, Westminster, MD 21157.

The family of Mr. Carl Leon "Brandy" Brandenburg Jr. created this Life Tributes page to make it easy to share your memories.

Send flowers to the Brandenburg family.