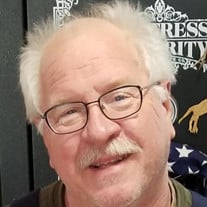 Brian David Rains, age 65 of Sykesville, Maryland passed away unexpectedly at home on Tuesday, February 15, 2022. Born October 5, 1956, in Baltimore, Maryland he was the first son of Carol Ann Ely Rains and the late Gerald David Rains. Brian graduated from South Carroll High School in 1974. He spent his first few years after high school working in Baltimore and playing men’s softball for The Loop where he made many life long friends. He then began his career for the US Postal Service as a mail carrier in Sykesville. In 1985 he was married to his wife Paula Ouellette Rains and welcomed their daughter Sarah Jean (Rains) Delaney. Around that time, he also began coaching girls soccer and basketball at South Carroll High School which he continued for 22 years. Brian was an avid hunter and outdoorsman. This passion and his love of country led him to spend countless hours volunteering for TheLink-Up.org Maryland Chapter as field coordinator and liaison to enable local Veterans opportunities outdoors. Following his early retirement from the US Postal Service, Brian was able to dedicate more of his time to his family and friends, always lending a hand whenever called upon. Over the last few years, he and his wife Paula enjoyed helping their daughter Sarah and son-in-law James pursue their dream in cultivating their farm in Carroll County where they will raise their family and provide new outdoor opportunities for local Veterans. His greatest joy came in 2021 as Brian and his wife Paula became grandparents to twin grandchildren Thomas Allan & Eleanor Briana; he since spent every possible moment securing the title of the greatest ‘Pops’ of all time. Brian never met a stranger, he could spark a conversation with anyone; he truly lived a life of unconditional service, continually giving back to family, friends, Veterans and the local community. His genuine kindness and considerate nature will live on in our memories forever as an example to all. In addition to his wife Paula Rains of Sykesville, he is survived by his daughter and son-in-law Sarah and James Delaney of Westminster, his twin grandchildren Thomas Allan & Eleanor Briana Delaney; mother Carol Ann Rains of Sykesville; brothers Gary Rains of Sykesville and Neil Rains & fiancé Michelle Pinkine of Hampstead; aunt Betty May of Eldersburg; cousins Steven May of Manchester and Deanna Steeves of Canada; father-in-law Phil Ouellette of Eldersburg; sisters-in-law and brothers-in-law Marsha and Gerry Leath of Texas, Liska Ouellette of London, England and Philip Ouellette of Virginia. He is also survived by many nieces and nephews. He is predeceased by his father Gerald David Rains of Sykesville, uncle Thomas May of Sykesville, nephew Jesse Rains of Sykesville, mother-in-law Sonja Ouellette of Eldersburg and brother-in-law James Ouellette of Texas. The family will receive friends from 2 to 4pm on Sunday, February 20, 2022, at Haight Funeral Home & Chapel, 6416 Sykesville Road, Sykesville where a funeral service will follow at 4pm. Interment will be private. In lieu of flowers, those desiring may make memorial donations to his passion TheLink-Up.org Carroll County / Maryland Chapter. Checks should be made out to: Sarah Delaney, memo: The Link-Up.org, and mailed to: 99 E Green Street, Westminster MD 21157. Online condolences may be offered at www.haightfuneralhome.com

The family of Brian D. Rains created this Life Tributes page to make it easy to share your memories.

Send flowers to the Rains family.