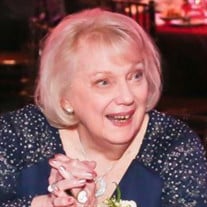 Beverly Elaine Anderson Smith, age 88 of Sykesville, passed away at her home on March 25, 2022 following a brave fight against cancer. She was a loving and caring daughter, sister, wife, mother, grandmother, and friend. Beverly was born to Boston Fear Anderson and Magdelena Habercam Anderson on December 20, 1933 in Baltimore, Maryland. Upon graduation from Catonsville High School, Beverly pursued an exciting career as a flight attendant with Eastern Airlines. Despite the many marriage proposals she received as a beautiful and spirited young woman, Beverly only had her eyes on her one and only, Donald Eugene Smith. While serving in the Korean War as a flight engineer for the Air Force, Donald kept a photo of Beverly with him at all times and they stayed in touch by letter. When he returned home from the war, they married on September 8, 1953 at St. Luke’s Methodist Church in Woodlawn, Maryland. They purchased farm land in Carroll County in 1963 and while Donald built the house, Beverly made the home. There was no doubt that those who entered her home left full and happy after enjoying a home cooked meal and a cold glass of iced tea. Since Donald’s unexpected passing in 1983, Beverly has spent all of these years living on the farm as a widow, waiting to be reunited with her soulmate in heaven. After the death of her husband, Beverly worked hard to earn her real estate license and had a successful career as an agent serving the Carroll County area. Beverly was known for her vivacious personality, steadfast dedication to her family, and deep love of her country. She spent her free time gardening, watching the birds, enjoying the company of her dogs, traveling to the beach, and collecting antiques. However, above all, she adored spending time with her children and grandchildren. Affectionately known as “Who-Who”, “Grams”, and “Mee-Maw”, Beverly embraced technology to stay connected with her grandchildren through Facetime, social media, and text messages full of emojis. She leaves behind her son Donald Eugene Smith, Jr. and wife Missy, her son Scott Andrew Smith and wife Dianne, and her daughter Kellie Elaine Patton and husband David. Beverly is a grandmother to Paula Babcock, Cricket Smith, Allicia Ruiz, Kelsey Smith, Fallon Pearre, and Sophia Custred, in addition to many step grandchildren and great grandchildren. In addition to her parents, husband, and brother, Boston Fear Anderson, Jr., she is predeceased by her grandson Donald Eugene Smith, III and granddaughter Taylor Lynn Smith. She also leaves behind very special cousins, Larry Kirkman and Diane Schulte Kirkman. The family would like to express their most sincere gratitude and appreciation for the compassionate care given to Beverly by the caretakers from Visiting Angels and the staff at Bridging Life Hospice Care. We invite you to join the family for a service in celebration and remembrance of Beverly at her church, Bethesda United Methodist, at 11:00 a.m. on Saturday, April 2. Interment to follow at Lake View Memorial Park in Sykesville. In lieu of flowers, memorial contributions may be sent to Bethesda United Methodist Church located at 328 Klees Mill Rd, Sykesville, MD 21784. Online condolences may be offered at www.haightfuneralhome.com

Beverly Elaine Anderson Smith, age 88 of Sykesville, passed away at her home on March 25, 2022 following a brave fight against cancer. She was a loving and caring daughter, sister, wife, mother, grandmother, and friend. Beverly was born to... View Obituary & Service Information

The family of Mrs. Beverly Elaine Smith created this Life Tributes page to make it easy to share your memories.

Send flowers to the Smith family.