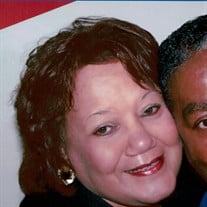 A memorable life ended on February 19, 2021; Beverly Ann (Groomes) Pitts, was affectionately known as “Bev” by family and friends, and “Boobie” by her late husband, Skip. Bev was the mother of one child, Dowayne Clifford Lee, (deceased) and the second child of Sarah Groomes Cook and Elwood Nicholas Groomes. Bev attended Cooksville Elementary School and graduated from Harriet Tubman High School with the honors as “Ideal Student,” in 1960. She went on to attend Morgan State University for the next several years, and then worked at IBM Federal Systems Division, Montgomery General Hospital, and Howard University Hospital, until leaving to establish a business with her sister and friends, in medical transcription in 1979. Bev and her late husband moved to Memphis, TN, in 1999, where they lived until 2013. During that time, she traveled over Europe and Latin America with her husband who was the Lead Guitarist for Isaac Hayes. Bev is survived by her siblings, Barbara Arlene Jones, Sylvia Juanita Groomes, Donnell Augustus Groomes, Regina Maddox, Catherine Lemon, and Darnell Myers and a host of nieces, nephews, relatives, and friends. Her memorial service will be be livestreamed on Wednesday, April 14, 2021 at 7 p.m. We invite all to join us in Beverly's celebration of life. Regarding Streaming: The stream will go simultaneously to Facebook (facebook.com/christmbc), YouTube (YouTube.com/cmbcmedia), and to the church's website (https://christmissionary.thechurchonline.com). Those desiring may send donations to the American Lung Association.

The family of Mrs. Beverly Ann Pitts created this Life Tributes page to make it easy to share your memories.

Send flowers to the Pitts family.