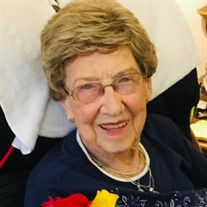 Beulah (Bea) Feezer went to be with her beloved husband of almost 76 years, the late John F. (Jack) Feezer, September 13, 2020. 11 days after her 100th Birthday. Born September 2, 1920 in Baltimore to the late Richard M. and Mildred (Cleaver) Winslow. During the depression the family moved to Medford, Carroll County and when Bea was 13 they moved to a farm in Marriottsville, Baltimore County. Within a mile (walking distance) of this farm, was Wards Chapel United Methodist Church. The Youth Group, the Epworth League was the center of entertainment for the youth in the neighborhood. This is where Bea met Jack at 14 years old and they began dating after her 16th birthday party. Bea graduated from Catonsville High School in 1938 and began working at Kresge’s Five & Dime store and then Stewart’s Department Store in Baltimore until she became a devoted mother in 1943. When first married Jack & Bea rented an apartment in Baltimore City, near Hilton St. When Jack was drafted into the Navy during WWII Bea moved with (Nancy) back to the farm in Marriottsville, with her parents and her sister Edna and their first child. After Jack was discharged from the Navy they moved to an apartment in Randallstown. In 1954 they built their 1st home on Lyons Mill Rd. and lived there until 1982 when they built their dream home in Marriottsville where they were so happy to be surrounded by their loving family. Jack & Bea provided a lovely pool and pool house where many gatherings were celebrated with family, friends, church groups and numerous groups the family was a part of. In December of 2002 they moved to Fairhaven. Bea was a stay at home, loving Mother and caretaker of her Mother. She was involved in many church and community groups. She was president of Randallstown Women’s Club and the United Methodist Women. A member of Randallstown Homemakers and Worthy Matron of Freedom Order of the Eastern Star. Jack and Bea were always very active members of Wards Chapel Church supporting the church through the recent addition. At the time of her passing Bea was the oldest member and still active until the COVID shutdown. In 2002 Jack & Bea created the R Wayne Feezer Memorial Foundation in memory of their beloved Son, Wayne who passed away December 1998. The Foundation has supported and continues to support numerous charities, including the Shriners Hospital for Children, Autism Speaks, Carroll County Hospital and Hospice, Boy Scouts, 4H and numerous other organizations. Also providing in excess of 100 scholarships to the youth of Wards Chapel Church. Bea was predeceased by her beloved Jack in 2017 and her beloved Son, Wayne in 1998 and her younger sister, Edna Shilling in 1993. Bea was the loving Mother of Nancy L. Parker and John F. Feezer, III and the late R. Wayne Feezer, mother-in-law of Harry Parker, Petie Feezer and Betty Ann Feezer. The Grandmother of 6: Traci Salvo (Dru), Shannon Olson (John), Heather Snyder (Curt), Brandon Feezer (Jill), John F. Feezer, IV (Jackie), Kristen Ghaffarian (Navin). Great Grandmother of 18: Ryan, Brendan and Sara Salvo; Jack, William and August Olson; Logan, Collin, Haleigh and Madison Snyder; Lydia and Cade Feezer; Natalia and Victoria Feezer; Zain, Ezra, Remy and Isla Ghaffarian. Due to the current pandemic, the family will gather for a private viewing at the Haight Funeral Home. Friends are welcome to join the family for a public graveside service to be held on Saturday, September 19 at 2:00 PM at Wards Chapel Cemetery, 11023 Liberty Rd. Randallstown, Md. 21133. Please bring your own chair and Mask. For those desiring may make memorial donations, please consider: The R. Wayne Feezer Memorial Foundation, 6699 Chateau Bay Ct. Sykesville, MD 21784, Wards Chapel Heritage Trust, 11023 Liberty Rd. Randallstown, MD 21133 or Carroll Hospice Dove House, 292 Stoner Ave. Westminster, MD 21157 Online condolences may be offered at www.haightfuneralhome.com

The family of Mrs. Beulah Mae "Bea" Feezer created this Life Tributes page to make it easy to share your memories.

Beulah (Bea) Feezer went to be with her beloved husband of almost...

Send flowers to the Feezer family.