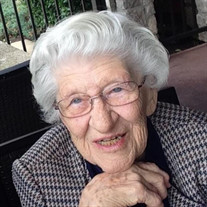 Betty Lyons Kirk (born Betty Louise Lyons), age 103, passed away on Thursday May 7, 2020 at the Fairhaven Retirement Community in Sykesville Maryland. Born December 11, 1916 she was the daughter of Dennis C. and Miriam Barnett Lyons of Eldersburg. She is pre-deceased by her husband Millard F. Kirk, and by her sister and brother, Jean (Lyons) Burton and Gerald B. Lyons. Betty was born in Downingtown Pennsylvania. She spent most of her childhood at the Lyons home on Johnsville Road in Eldersburg at a location across the street from where the Safeway grocery store now stands (the family home was lost to fire in the early 1960s). Her mother, father, and the family were well known in the community at the time, owning and running the Crossroads Tea Room which stood on the southwest corner of the intersection of MD-32 and MD-26 from the mid-1930s though the end of the 1950s (the Royal Farm Stores now stands at that location). Due to money issues during the depression Betty attended Eastern High School while staying with her Aunt, Louise Reifschneider, on Springlake Way in Baltimore. Betty was fortunate to obtain a scholarship to attend the University of Maryland where she earned a degree in Institutional Nutrition and graduated in 1938. After graduation she held a number of jobs, including work for an electric utility in Virginia where she drove about the back roads of still-being-electrified rural Virginia to show people how to use the “new technology” of the day: an electric powered washing machine, with a wringer. When the United States entered World War II Betty returned to the University of Maryland where she ran the dining hall. It was here where she met her future husband, Millard Kirk, whom she married after his return from Naval duty in the South Pacific. Their romance was fueled, at least in part, by her ability (being the daughter of a storekeeper) to send him regular shipments of Granger pipe tobacco during his deployment. Following marriage Betty turned her attention to what would be her vocation for the remainder of her life: homemaker and caregiver to family and friends. After living at well over a dozen locations between 1946 and 1955 Betty and Millard bought their only home in Timonium Maryland, on Greenmeadow Drive near the state fairgrounds, where they lived and raised their two sons, Scott and Mark. Here she baked, cooked, volunteered in the community, looked after aging relatives, pulled far more than her share of the domestic load, and was driven by her depression-era experience to save anything possibly useful. Betty loved to host their friends who visited Timonium during the weeks of the state fair, especially their close friends the Poffenberger family, a tradition that continued through three generations and into the 1990s. In 2009 Betty and Millard took up residence at the Fairhaven Retirement Community in Sykesville Maryland. This was a “return home” for Betty, who frequently remarked as to how much change one sees if they live long enough. Betty is survived by her two sons, Scott who resides with his wife Diane in Seven Valleys Pennsylvania and Mark who resides with his wife Marjorie in Unity New Hampshire. She is also survived by six grandchildren (April, Ben, Karen, Cindy, Gerald, and Charles) and five great-grandchildren (Olivia, Anthony, Sloan, Alex, and Zoe). Due to restrictions on public gatherings caused by the Corona virus her burial will be restricted to close family members. A memorial / celebration of life service will be planned at a future time. In lieu of flowers the family requests that memorial donations be sent to the American Indian College Fund. https://collegefund.org/

Betty Lyons Kirk (born Betty Louise Lyons), age 103, passed away on Thursday May 7, 2020 at the Fairhaven Retirement Community in Sykesville Maryland. Born December 11, 1916 she was the daughter of Dennis C. and Miriam Barnett Lyons of Eldersburg.... View Obituary & Service Information

The family of Mrs. Betty Lyons Kirk created this Life Tributes page to make it easy to share your memories.

Send flowers to the Kirk family.