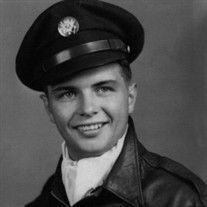 Benjamin F. Brown, III, age 97, died Sunday April 25, 2021. Born June 22, 1923 to Lillian (Berry) and Benjamin F. Brown, Jr. Ben spent most of his early life in Sykesville. After graduating from Mount Airy high school in 1940, he worked in the Fingerprinting Division of the FBI, where he met Anna Mae Dole. They married in 1943, the same year Ben was drafted into the Army. As a B-29 tail-gunner, he flew 33 successful missions before returning stateside to family life and school. Ben received his Juris Doctor from the George Washington University Law School in 1951. Rather than practice law, he enjoyed many business interests including his insurance agency (his first and foundation company), hospitality, art, antique dealing and importing, and retail. Ben was an excellent golfer. He was a lifetime member of the PG Country Club, president of the PG Lions Club, and a member of the Salvation Army board of trustees. Ben is survived by his 7 children: Berry (Joanne Marth), Mark (Suzanne Chase), Craig (Ellen Lepore), Blair (Mary Louise Loefler), Marian/Dolly, Margaret (John Iacangelo), and Elizabeth (Ron Arthur); 17 grandchildren; and 9 great-grandchildren. Ben was preceded in death by his parents, his wife Anna Mae, and his brother Lee Berry (Mike). A graveside service will be held on Sunday, May 2nd, at 1pm at Springfield Cemetery, 7300 Spout Hill Road in Sykesville. Memorial contributions to the Salvation Army are most welcomed.

The family of Mr. Benjamin F. Brown III created this Life Tributes page to make it easy to share your memories.

Send flowers to the Brown family.