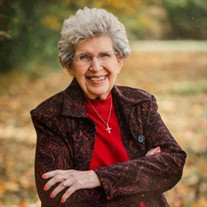 Mae Marshall of West Friendship, MD died peacefully in her home at the age of 92 with her children by her side as several little children stood outside her bedroom window singing her Happy Birthday. Born May 20, 1929 in Baltimore, MD was the... View Obituary & Service Information

The family of Mrs. Angelia Mae Marshall created this Life Tributes page to make it easy to share your memories.

Send flowers to the Marshall family.