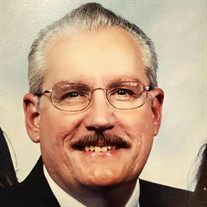 Andrew Carroll Marsiglia, age 76, of Finksburg, died Sunday, January 16, 2022, at BridgingLife Dove House in Westminster. Born August 1, 1945 in Baltimore, he was the son of the late John and Addilene Marsiglia. Andrew was preceded in death by his sister Joyce Green. He is survived by his wife of 47 years, Gale Marsiglia. Andrew had a variety of interests and hobbies over the years, which included talking on his CB radio, fishing, photography, music, spending time at the American Legion with friends, and making pens in the woodshop at the senior center he and his wife attended in Hampstead. He loved Italian food and enjoyed eating oysters and going to Orioles games with his brother John. Before moving to Finksburg, Andrew, Gale and his children lived in Morrell Park in Baltimore where he decorated his house for Halloween and dressed up in his werewolf costume to give the local kids a good scare. Some of his fondest memories and proudest moments included working down Lexington Market with his family in his earlier years, his service in the Air Force Reserves, becoming a top salesman at Lucas Brothers, running office supply stores in Columbia and Washington, managing various departments at Macy’s, and spending time with his children and grandchildren. Surviving in addition to his wife are son and daughter-in-law, Andrew and Mickelle Marsiglia, daughter, Diana Rohrer of FL, and daughter and son-in-law, Amanda and Luke Bond; brother and sister-in-law, John and Julia Marsiglia; and grandchildren, Christopher, Thomas, and Collin Marsiglia, Alana Cedeno, Connor Jones, and Averi and Lance Bond. The family will receive family and friends on Tuesday, January 25th, from 2-4 pm and 6-8 pm at Haight Funeral Home & Chapel, 6416 Sykesville Road, Sykesville where a funeral service will be held on Wednesday, January 26th, at 11 am. Interment will follow at Loudon Park Cemetery in Baltimore. Flowers and cards may be sent to Haight Funeral Home & Chapel. Additionally, those desiring to make donations in Andrew’s memory may send them to BridgingLife Dove House in Westminster. Online condolences may be made at www.haightfuneralhome.com

Andrew Carroll Marsiglia, age 76, of Finksburg, died Sunday, January 16, 2022, at BridgingLife Dove House in Westminster. Born August 1, 1945 in Baltimore, he was the son of the late John and Addilene Marsiglia. Andrew was preceded in death... View Obituary & Service Information

The family of Mr. Andrew Carroll Marsiglia created this Life Tributes page to make it easy to share your memories.

Send flowers to the Marsiglia family.