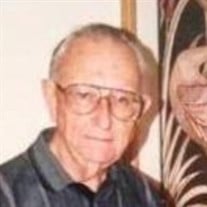 Allan P. Breller, age 93, formerly of Marriottsville, passed away on Monday, September 21, 2020, at Angel's Touch Assisted Living. Born November 20, 1926, in Buffalo, New York he was the son of the late Anthony Breller and Florence Wild Breller. He was the husband of the late Shirley M. Breller who died in 2001. Allan was raised and educated in New York. He had worked in Computer Education Administration. He was a member of St. Joseph Catholic Community, Eldersburg and a member of the Knights of Columbus Council #7612. Allan was a WWII US Navy veteran and achieved the rank of PO 3rd Class. He served in the US Navy from February 1945-July 1946 and then in the US Naval Reserve from July 1946-June 1950. He is survived by daughter and son-in-law Pamela and Les Simon of Piney Flats, TN; sons and daughters-in-law Allan C. Breller and wife Tia of Granite Bay, CA, Mark A. Breller and wife Carol of Orlando, FL and David P. Breller of Lansdale, PA. He is also survived by 8 grandchildren and 4 great-grandchildren. He was predeceased by grandson Leslie A. Simon and brother Gerard "Gary" Breller. The family will receive friends on Friday, September 25, 2020 from 9 to 10:45am at Haight Funeral Home & Chapel, 6416 Sykesville Road, Sykesville. A funeral liturgy will follow at 11:00am Friday at St. Joseph Catholic Community, 915 Liberty Road, Eldersburg. Interment will be in St. Alphonsus Church Cemetery, Woodstock. In lieu of flowers, those desiring may make memorial donations to St. Joseph Catholic Community, 915 Liberty Road, Eldersburg, MD 21784. Online condolences may be offered at www.haightfuneralhome.com

The family of Mr. Allan P. Breller created this Life Tributes page to make it easy to share your memories.

Send flowers to the Breller family.